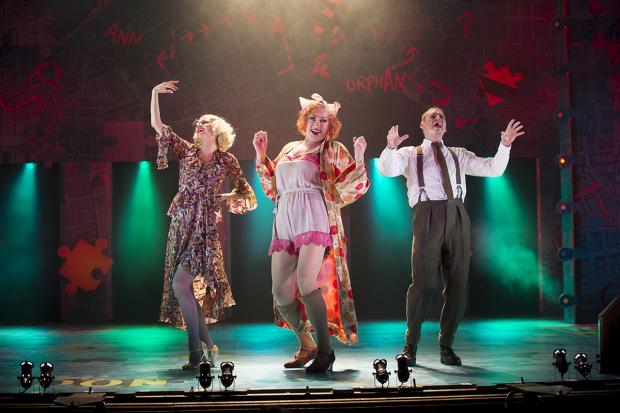 IT'S the ultimate rags to riches tale which proves depressions needn't be depressing.

The stage revival of Annie bubbles with optimism in every joyful scene.

Even the homeless victims of the great depression can't help but burst into wonderful song and dance as they huddle around a stove for warmth.

It's the infectious optimism of one little girl, 11-year-old Annie, who is plucked from a New York orphanage by billionaire financier Oliver Warbucks to the top of 1930s American society where she influences none other than President Franklin D Roosevelt with her positive outlook on life.

It's sugar sweet, but you can't help but get swept away by Annie with her long-held belief the parents who abandoned her will return one day.

As you might expect from a show starring Strictly Come Dancing's Mr Nasty himself Craig Revel Horwood, the choreography was superb. Every step was perfectly performed by a wonderful ensemble who took on various roles from staff at the Fifth Avenue mansion to members of the President's cabinet as the story skipped along nicely with only one brief technical hitch towards the end of the first act.

Revel Horwood was completely unrecognisable and utterly brilliant as gin swigging, sex starved Miss Hannigan. His first foray onto stage in a nightie had worrying overtures of a Pantomime Dame, only not as nasty, but from then on he sang, danced and acted the part beautifully, despite high heels and a gigantic fake bust.

But the real stars of the show, aside from Amber the dog as Sandy with her regular runs across stage, were the orphans, ably led by star of the future 12-year-old Isabella Pappas as Annie. Her voice was punchy, powerful and pitch perfect and the fact she was nominated for an Olivier Award for her only other major role as Iris in The Nether in London comes as no surprise.

I've always been a huge fan of the 1982 classic film. This was actually a revival of the 1977 Broadway musical, but the young members of the audience were clearly there because they enjoyed the 2014 movie remake.

Did the latest show live up to all those other superb previous versions?

You bet your bottom dollar it did.